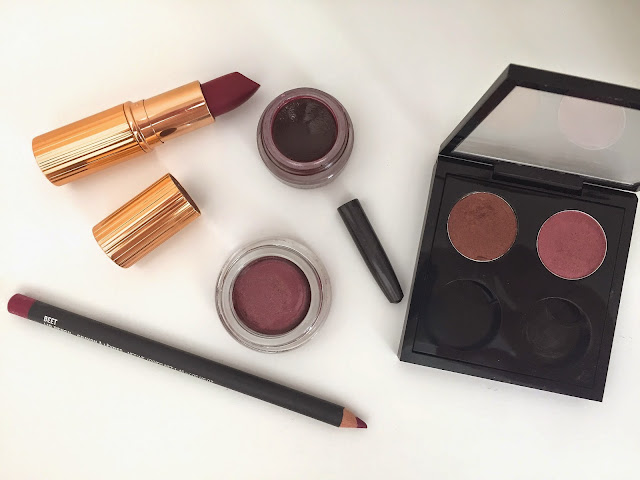 A few posts have gone by now where I've either mentioned a red lip or a red eye but haven't gone that step further to mention them together, until today. Is it a thing that people do? I remember when it was a taboo to match your make up in such a way, however feel that now we have more room to play around and try out things that back in the day were a no go.

When going for a red lip I've been choosing to prime my lips before starting my make up with the Models Own lip balm in Blackberry. It's a balm however stays put as a bit of a stain and starts off your berry lip. Doing exactly what you need it to do its perfect before the real deal. Talking of real deal, the Mac lip pencil in Beet has rocketed to quite a well used product in my collection (having had to sharpen it 3 times already since I bought it). it's creamy, easy to apply and stays put through food and drink. If I'm feeling more of a deep red instead of berry I'm popping on the Charlotte Tilbury Matte Revolution in Red Carpet. This again is a great stayer however takes slightly longer to apply because of how matte it is but is still gorgeous to wear.

Moving onto eyes I'm rotating between either Mac's Cranberry or Antiqued (both of which have featured on the blog before). Cranberry is the brighter of the two and really enjoy this on the eye alone with Beet as they have a real pop of colour about them. Antiqued I sometimes pop in the crease but alone looks great with the Charlotte Tilbury lipstick. I also like to wear the Maybelline cream shadow in Pomegranate which looks very similar to Antiqued on the lid however just a tad brighter.

Are you a matcher? Give it a go! I think you'll be pleasantly surprised.

June 12, 2018
AD with Yes To Good morning and happy National Cucumber Day! I love cucumbers! There, I said it. I like to eat them, drink them in juices and smoothies, and even like them in my skincare routine. Over the last couple of months I've really struggled with my skin. Getting hard lumps under the skin, and rash like breakouts that were super persistent and refused to die down. I thought about whether or not I was using too many different products and clogging up my skin, or it was just down to stress or something. All I knew was that I had to give something a go and hope for it to work it's magic on my problem skin as it was getting me down. What a day to share my love of cucumbers and my love of the  Yes To Cucumber  range with you cuties. Make yourself a cheese (vegan cheese if you're like myself) and cucumber sandwich and take a read about a range you'll want try!  It may shock you to see an entire range made with cucumbers, but it's actually a
4 comments
Read more

November 17, 2020
contains pr products, *aff My obsession with books and reading is still going strong guys! Since my post way back outlining how I was getting back into ready ... I think was back in 2018 and here we are. I've smashed my Goodreads goal of reading 50 books this year, and I'm actually closer to achieving 100 books read. I don't want to put too much pressure on myself but, I'd LOVE to get there. Anyway, books are a huge part of my life now. And even though I like everyone go through slumps where I don't want to read anything, when I am in the reading mood I normally have a few on the go at the same time and have turned into a big mood reader. Which I've found actually helps me get through books so much quicker.  As a member of the Book Break Insiders Influencer group, I am lucky enough to be sent a selection of books every month. Which helps to keep my nose is a book that's for sure! Book 1: The Silence by Don DeLillo* A timely and compelling novel about what ha
1 comment
Read more

June 28, 2018
Good day beauties! So, you guys have been messaging me here, there and everywhere about sharing my top cruelty free beauty products and brands with you.  And because my cruelty free living post did so well, guess what you guys have today?  You've guessed right! And I'm super happy to share with you some top beauty products and brands I reach for, but first I'd like to just share with you why going cruelty free is good.  For me, having a cruelty free lifestyle means not using anything containing animals or their by-products, or using products where animals have been mistreated and used for testing them, and is the way I wish I had chosen to live my life a long time ago. Make up and skincare are products are materialistic in my eyes. We want these things and like them, so I think it's so unfair for innocent animals to be used, killed, kept in awful conditions and tested on against their will just so we could have that new mascara. There's just no need for
1 comment
Read more