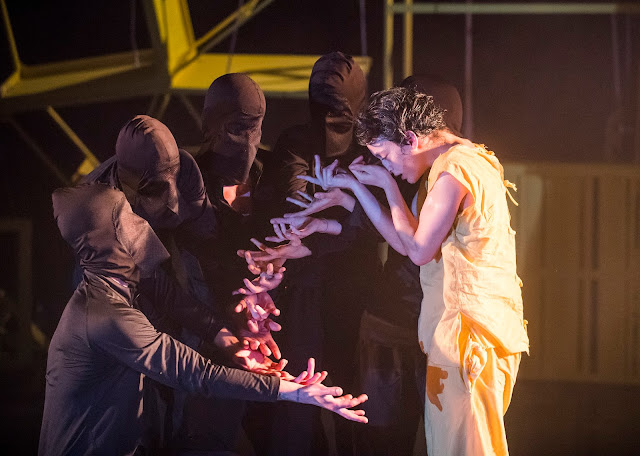 Theatre in all forms has always been a focal point to my life, and I like to take time out of my day job within the arts to enjoy it for performance sake. Having studied Jasmin Vardimon myself at university I knew what to expect in terms of her physical theatre a choreographic style. Having said this, I actually found myself being surprised with her creativity and unexpected approach to this traditional story that we can all feel the back in our childhood day vibes.

Taking a well known story and recreating it is a daring move, but is it a recreation? During the symposium after the show Jasmin referenced the fact she had been very much influenced and inspired by the original story (before Disney) and wanted to focus on the theme of manipulation. The power to manipulate the audiences minds to making them believe what they see. manipulating the story to include elements it hasn't had before (like having a female playing Pinocchio). 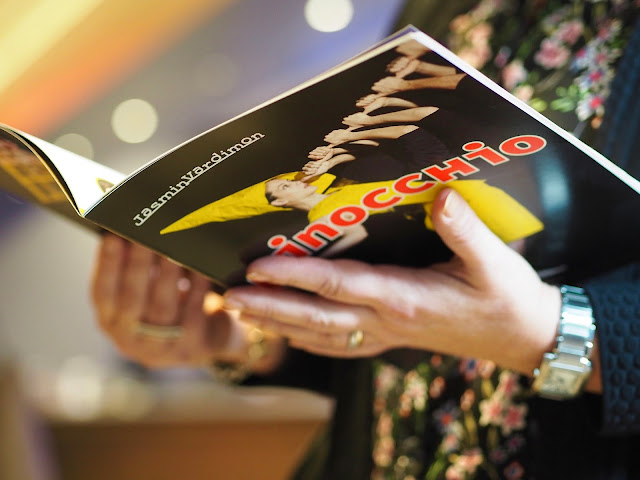 One element in particular that fascinated me was the staging and set design. How everything was managed and manipulated by all of the performers. No prop support or people running in during blackouts to move staging around, just the performers. Jasmin spoke about how the dancers weren't just dancers, but were manipulators of the stage and the environment that they were performing on. Again, the theme of manipulation through another aspect of the piece.

With regards to movement content, of course it was very physical and creative. The smallest movements were clearly thought about a lot down to the smallest breath. One moment that really stayed with me after the performance was when Pinocchio was first starting to walk independently, but of course that element of manipulation as Geppetto assisted the action was seen clearly from the audiences perspective. 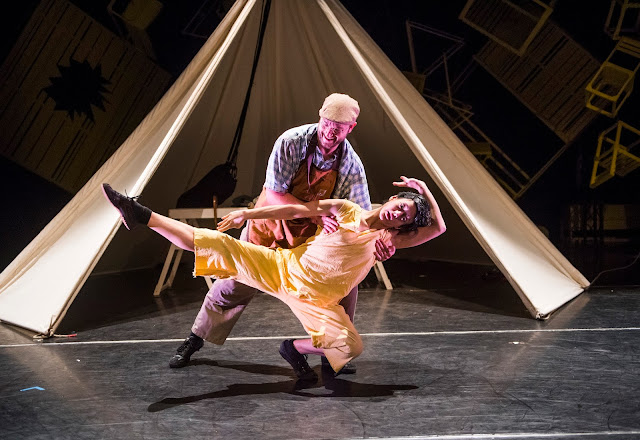 The sheer strength from the lead performer was incredible, and the endurance she had was breathtaking. With continuous use of her knees, bending, kneeling, spinning and jumping she really did show her perfected stamina and ability and why she had been cast as the lead. Staying with the point of Pinocchio being casted as a women, I couldn't help but think whether or no this had anything to do with the quality of the movement, to just contradict the traditional story, or was it purely through the audition process and casting process that she was chosen? Whatever the specific intention of this casting, it was debatable as to whether or not you really noticed or whether it made any difference. But in my opinion, this performer really stole the show. 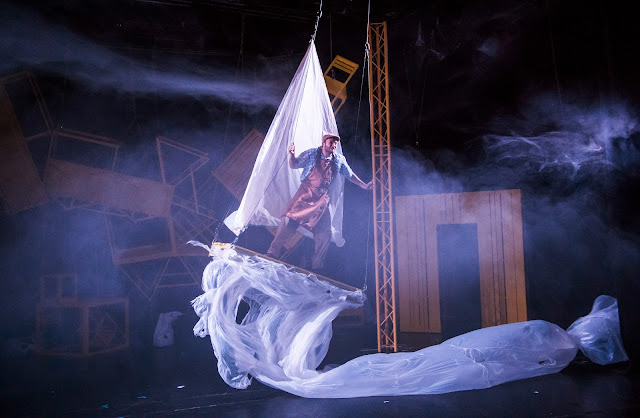 Without going too far and turn this review and informative post into a full blown A Level analysis, I will sum up. If you manage to catch this performance by Jasmin you will be in for a creative, imaginative and enchanting take on an old story loved by many and whisked to a place where nothing is impossible. You'll see a young Pinocchio share the story of growing up and learning what it is to be human. There'll be tough sections (where things get a little dark), and sections where you'll feel joy and your heart will ache for the  beauty that you see. The movement will inspire you, make you laugh and set your imagination on overdrive until you see the flying boat that's completely and utterly moving and in control by the performer and only the performer.

I'll always have a soft spot for the Jasmin Vardimon company, and I'll support whatever they do as I fully appreciate and love her intention behind the creations. You'll never go to just see a dance or s performance, but a show and an experience.

Tell me, have you seen this piece or anything else by her company? What did you like? What catches your eye in these stunning pictures by Tristam Kenton.

June 12, 2018
AD with Yes To Good morning and happy National Cucumber Day! I love cucumbers! There, I said it. I like to eat them, drink them in juices and smoothies, and even like them in my skincare routine. Over the last couple of months I've really struggled with my skin. Getting hard lumps under the skin, and rash like breakouts that were super persistent and refused to die down. I thought about whether or not I was using too many different products and clogging up my skin, or it was just down to stress or something. All I knew was that I had to give something a go and hope for it to work it's magic on my problem skin as it was getting me down. What a day to share my love of cucumbers and my love of the  Yes To Cucumber  range with you cuties. Make yourself a cheese (vegan cheese if you're like myself) and cucumber sandwich and take a read about a range you'll want try!  It may shock you to see an entire range made with cucumbers, but it's actually a
4 comments
Read more

November 17, 2020
contains pr products, *aff My obsession with books and reading is still going strong guys! Since my post way back outlining how I was getting back into ready ... I think was back in 2018 and here we are. I've smashed my Goodreads goal of reading 50 books this year, and I'm actually closer to achieving 100 books read. I don't want to put too much pressure on myself but, I'd LOVE to get there. Anyway, books are a huge part of my life now. And even though I like everyone go through slumps where I don't want to read anything, when I am in the reading mood I normally have a few on the go at the same time and have turned into a big mood reader. Which I've found actually helps me get through books so much quicker.  As a member of the Book Break Insiders Influencer group, I am lucky enough to be sent a selection of books every month. Which helps to keep my nose is a book that's for sure! Book 1: The Silence by Don DeLillo* A timely and compelling novel about what ha
1 comment
Read more

June 28, 2018
Good day beauties! So, you guys have been messaging me here, there and everywhere about sharing my top cruelty free beauty products and brands with you.  And because my cruelty free living post did so well, guess what you guys have today?  You've guessed right! And I'm super happy to share with you some top beauty products and brands I reach for, but first I'd like to just share with you why going cruelty free is good.  For me, having a cruelty free lifestyle means not using anything containing animals or their by-products, or using products where animals have been mistreated and used for testing them, and is the way I wish I had chosen to live my life a long time ago. Make up and skincare are products are materialistic in my eyes. We want these things and like them, so I think it's so unfair for innocent animals to be used, killed, kept in awful conditions and tested on against their will just so we could have that new mascara. There's just no need for
1 comment
Read more